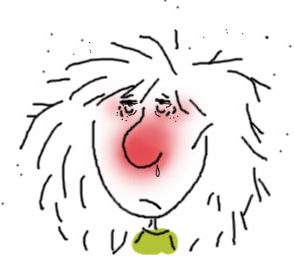 As I hang out in London mainlining a steady stream of cups of tea with honey, it occurs to me that perhaps I could share a story about being ill while travelling and general advice for dealing with illness while away.

I’ve mentioned this in the past: I’ve travelled a lot. Sometimes it’s been for long stretches of time (6 months, or 3 months a few times), and with the additional stress on your body, illnesses happen.

Between walking huge distances every day (I often carry a pedometer and walking 30,000 steps a day, 20km, is not unusual while exploring a new city), different and inconsistent meals, jetlag, as well as exposure to different viruses and bacteria, your body often takes a battering and succumbs to illness.

Some of the fun illnesses I’ve dealt with while away from home:

I have to say that when you’re coughing up a lung and wake up with your eyes glued together travelling to the next city doesn’t seem very enticing. Sometimes all you really want is some time to just put the world on hold and hide in a room for a few days. That’s how I felt while on a Contiki tour. Those tours are notorious for spreading the “Contiki Cough” as there are usually 40-50 people together on the tour on a single bus so it gets passed along throughout the group.

Arriving in Oslo, I could feel my eyes being itchy in that unpleasantly familiar way so when we were told we had the afternoon to go sightsee (or otherwise) I decided to take the opportunity to get some medical aid. Others headed to the nearest museum or landmark for photographs, I headed for the information office and asked about the nearest medical centre.

This involved figuring out the bus/tram service which, trust me, is not what you feel like doing when you just want to be in bed and to be better.

Despite this, I acquired a tram ticket, directions to the medical centre and a little bit of hope. When I arrived at the sparsely populated medical centre, I explained what I needed and the (surprisingly friendly) receptionist informed me that since I was a foreigner with travel insurance I was better off going to the other medical centre several blocks away.I was not in any shape to argue so I  took her hand-drawn map and made my way to the next medical centre.

There, again served quickly, the doctor listened to my lungs and declared that it was the sort of cough that would eventually go away on its own. As far as my eyes were concerned, he wrote out a prescription and tried sending me on my way. When my hand touched the door I turned back because I realised that often eye drops require refrigeration, so I asked if these ones did. He said yes and at my request gave me an alternate option which did not require refrigeration, (preferable when on a bus tour). And so, after 3-4 hours of wandering between medical centres and pharmacies I emerged victorious (and 90 euros poorer). I was just glad I’d gotten aid in a country where many people spoke English.

My eyes cleared up after a few days and eventually so did my cough.

But these days I plan my trips differently.